Coach of the Year? You're Fired!

Share All sharing options for: Coach of the Year? You're Fired!

As all of you know, Byron Scott has recently been fired by the New Orleans Hornets. This should come as no surprise if you've followed the Hornets in the past. George Shinn is a guy who can assemble winning teams, but in all cases, profit comes before winning. In this case, he's gotten rid of a successful coach, so he can hire Tim Floyd to ghost coach as an assistant, while Jeff Bower serves as a puppet so Tim Floyd doesn't get as much money.

He got this win after providing a 22 win turnaround to propel the Grizzlies to a 50 win season and the playoffs. They got swept out of the first round by San Antonio, but it was probably the best season in Grizzlies history up to that point. The next season, he started 5-7, had some, "Health Issues" and walked out the door. The team went on to make the playoffs again under Mike Fratello. Granted, this isn't a matter of bad coaching or anything, but all curses have to start somewhere, right? 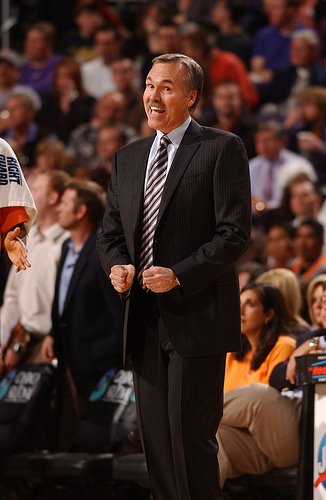 Mike D'Antoni and his fast break offense had done endless positives for the Suns, especially after their trying to find an identity Post-Jason Kidd. He took a roster of aging players like Anfernee Hardaway, Stephon Marbury, Tom Gugliotta, Howard Eisley, and Antonio McDyess and made success with a completely new roster, featuring players like Steve Nash, Shawn Marion, Joe Johnson, and Amare Stoudemire. It was quite the accomplishment. But after two seasons of Semi-Finals losses, a Conference Finals loss, and a loss in the first round after Shaq was brought to town against D'Antoni's wishes, the Suns kicked him out the door. Now, how many times does that happen? Now he coaches the tanking New York Knicks. Talk about bad luck, and the start of a trend. 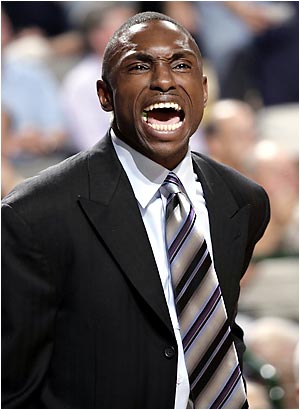 Avery Johnson won this award after inheriting an under achieving Don Nelson team. He forced them to play regular basketball, and as a result, they became one of the best teams in the NBA. But, after an embarrassing loss in the Finals after being up 2-0 on the Heat, an embarrassing (albeit totally awesome) loss to his predecessor's Golden State Warriors in the first round, and an understandable loss in the first round to the Hornets after a bad move for Jason Kidd, he was out on the street, and hasn't found another coaching job since. That's even worse luck.

The Raptors weren't extremely impressive under him, but getting the Raptors to the playoffs is, in itself, an accomplishment. The even bigger accomplishment was taking a international roster with many players who spoke entirely different languages, and making them work as one, cohesive unit. The future looked bright for him next season, but he lost Morris Peterson, an integral part of the teams success. He finished 6 wins lower at 41-41, and was booted out of the first round. Next season, it got even worse. He got an injury-prone Jermaine O'Neal, and lost a lot of his international talent, leading to a lack of team unity. After a 8-9 start, he was out of a job. His successor, Jay Triano, processed to poop the team into oblivion with a 25-40 record. This year, they look to be pretty good with the additions of players like Hedo Turkoglu, Demar DeRozan, Jarrett Jack, and Amir Johnson. Sam Mitchell hasn't found a job since, and has to be licking his chops at what he could have had. Bad luck strikes again.

Byron Scott is the latest victim of this curse. He won the award after battling through two injury-laden seasons in Oklahoma City to finally become a playoff contender in New Orleans. He was gifted with Chris Paul, Peja Stojakovic, and Morris Peterson, while lucking into surprise stars in David West and Tyson Chandler. Unfortunately, his luck would turn sour as Morris Peterson, Peja Stojakovic, and Tyson Chandler suffered long injuries. As a result, the team finished 7 wins below last season at 49. They were promptly kicked out of the playoffs by the Denver Nuggets. Yet, I didn't feel that his job was on the line. But after a 3-6 start with Emeka Okafor in place of Tyson Chandler and Peja Stojakovic starting to show his age, Byron Scott was given the good 'ol pink slip. I'd hire him as my team's coach any day, but for right now, he's probably stuck as jobless until next year. 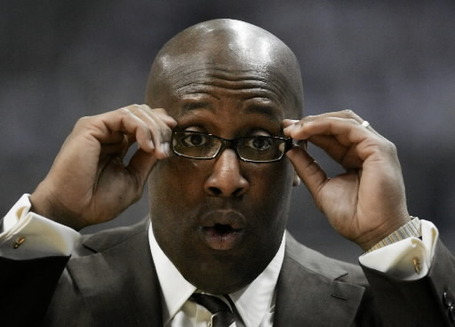 Could Mike Brown be on the street, selling his stylish glasses for food?

Will the curse continue? I say yes. Shaq promised to retire after this season, LeBron James is going to be a free agent, and without those two, the Cavaliers couldn't possibly be worth more than a low playoff seed at best. Which could lead to Mike Brown bringing the unluckiness streak to 6, and having people around the league start to believe that the award really is cursed.

One could point out that the award is given to coaches that are just the hot commodity at the time and not to stable, long term coaches, but that would ruin the fun! Plus, guys like Pat Riley, Phil Jackson, Gregg Popovich, Don Nelson, Larry Brown, and Phil Jackson have all won the award. So quiet, doubters! The new Madden Curse is upon us! I pity the man who receives the next Coach of the Year Award!

Lets hope that Scott Brooks never gets it.