James Harden has a bit of point guard in him | NewsOK.com
[The local Harden love continues. Where is the national love, I don't know? Lucky Harden only leads the league with the best assist to turnover ratio.] James Harden insists he’s never considered himself capable of playing point guard. Two weeks into his NBA career, the Thunder rookie leads the league in a category normally dominated by point guards. After dishing out eight assists in his hometown to spark the Thunder to an 83-79 win over the Los Angeles Clippers late Wednesday night at the Staples Center, Harden leads the league in assist-to-turnover ratio.

THUNDER: Ibaka Making Progress Both On, Off The Court
[Hey baby! Ibaka is starting to feel comfortable on the court and with the English language. Should we expect more smack talking on the court?] Said Ibaka: "That’s given me more confidence and that’s very important for me. I thank my teammates. The first game in Sacramento, those two minutes gave me more confidence for the next time." His confidence on the court was evident. Off the court, he’s speaking English more confidently; Friday was just the third time he had spoken to reporters without the help of a translator. Given the language barrier and the circumstances that faced him on the court, Green was impressed with the way Ibaka handled himself on Wednesday. "He knows how to play the game, he knows about spacing," Green said. "He can look at a play and remember it. But we’re also there to help him if he forgets. For him to be his first year in the league, as far as the language barrier and everything, I think he’s doing a pretty good job of understanding a lot of things." Ibaka credited his teammates for helping him learn English on top of the classes he said he’s currently taking. In two months, Ibaka said he hopes his English will be much improved. Ibaka said his favorite word he’s picked up, slang or otherwise, is "baby," which he and his teammates toss around with each other. Ibaka still reads his French version of the Bible prior to every game, just so he can brush up on one of four languages he speaks, and considers himself to be a religious person.

Thunder notebook: Bench support | NewsOK.com
[Scott Brooks got jokes] One of the first questions from a Los Angeles reporter following Wednesday’s game: "Kevin is a match-up problem for a lot of people, but the Clippers certainly didn’t have an answer." "Yeah, Kevin Ollie had 11 points. He was good tonight," Brooks said with a smile, knowing the reporter was referring to Kevin Durant. Ollie did have his best game, scoring 11 points, highlighted by two game-clinching free throws with 1.8 seconds left.

Thunder-Spurs Preview - Nov. 13, 2009 - NBA - CBSSports.com
Tim Duncan and Tony Parker are out with sore left ankles. One of them should return Saturday night, but coach Gregg Popovich won't say which. The Spurs, looking to improve to 5-0 at home, hope one of their superstars will be back when they face the Oklahoma City Thunder. San Antonio (4-3) played without Duncan and Parker on Wednesday, but still managed to beat Dallas 92-83. Popovich said one will likely return Saturday, although he didn't hint as to who it would be. Both missed the first two games of this three-game homestand, but San Antonio hasn't missed a beat. [Perhaps Pops is bluffing and both Timmy and Tony will be out?] 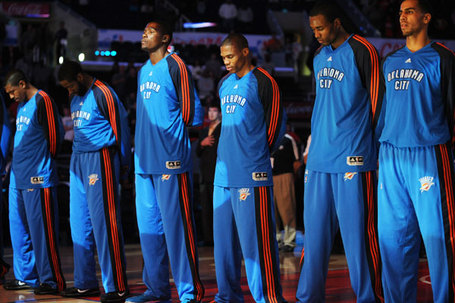 LeBron James may change jersey number : InsideHoops
[LeBron is hoping to retire the #23 league-wide.] Basking in the glow of a victory over the Heat, Cavs superstar LeBron James looked over at his idol sitting in the stands at AmericanAirlines Arena on Thursday night and made a command decision. Out of respect to Michael Jordan, who sat courtside and watched James score 34 points, James said he is planning on switching his number after this season from No. 23 to No. 6. It just sort of came out, but it was obvious he’s been thinking about it for a while. And James wants to lead a movement to get every player who wears No. 23 in the league to give it up as a tribute to Jordan.

Friday Bullets - TrueHoop Blog - ESPN
If LeBron James switches to number six, he realizes he'd be carrying the torch for Julius Erving and Bill Russell. But several have pointed out that if you're going to ask players to retire #23 league-wide out of respect to Jordan, can you in good conscience wear the number of 11-title winner Russell? By the way, who are the #23s now in the NBA? Besides James it's Devin Brown, Marcus Camby, Toney Douglas, Stephen Graham, Wesley Matthews, Kevin Martin, Jodie Meeks, Byron Mullens, Jason Richardson, C.J. Watson, Martell Webster and Lou Williams. Also, some big-picture perspective on James' statements.

Byron Scott Fired, Hornets Continue Reeling | Thunder Rumblings
[A great article about OKC's first NBA team. Could the Hornets miss the playoff this year?] Losing the first pro franchise this state has ever seen was gut-wrenching, though, on April 13, 2007, when the Hornets played their last game inside the Ford Center as "New Orleans/Oklahoma City" and uncertainty still remained about whether the Sonics would soon shuffle south as a substitute. The disappointment dialed up when the Hornets, in their first full season back in New Orleans, assembled a franchise-best season, a record of 56 wins and 26 losses and a trip to Game 7 of the Western Conference Semifinals. It became almost unbearable while watching Chris Paul turn in an MVP-caliber season and establish himself as the league’s best point guard.