I really doubted why the Thunder were picking up an ancient point guard who barely got any minutes on Allen Iverson's 76ers, but now I know. The dude doesn't always put up the numbers, but he's an absolute team player. Imagine this: With 27 seconds to go, the Thunder have the ball with a 2 point lead. Kevin Durant holds the ball, and drives in with 5 seconds to go on the clock. He dishes it to Green, who dishes it to an open Ollie. Ollie shoots the ball, and it goes way short. But, it bounces out and right back into the hands of Ollie as he gets fouled. With the opportunity to put the game away, he sinks the two free throws like nobodies business and seals the victory. He only had 11 points, 5 rebounds, and 1 assist, but, as evidenced by 4-7 shooting, 100% Free Throw Percentage for the year, and +12 +/- ratio, he had a huge positive impact on the team. Thus, he earns tonight's Thunder Wonder.

On a less positive note, Russell Westbrook had a mild ankle sprain, went 1-11 from the floor, and scored only 2 points. Talk about a bad game. Combined with Thabo Sefolosha's mediocre offensive performance (1-3 for 2 points, but a solid 8 rebounds), that makes for only 4 starting front court points all game. Granted, our backup back court combined for 18, but it's still amazing that we won the game at all. Thanks to Electric Pencils for pointing this out in the game thread. While I'm here, I'll go ahead and give Russell Westbrook the Thunder Blunder award. 1-11 shooting is simply unacceptable, and I don't think it would have gotten much better later in the game if he had never had a ankle sprain. 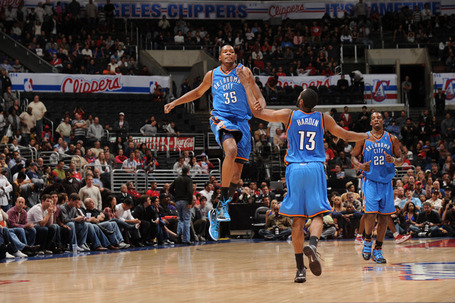 KD: "Good news, everyone! I've learned how to fly!" James: "Get back down here! We've still got a game to play!" Uncle Jeff: "Yeah, Yeah, I've done that before."

The announcers were constantly harping on how James Harden was coming to his home town, and he had to shell out the cash to get seats for family and friends he "never knew he had". Well, hopefully he made some fans tonight, as he had 7 Points, 8 Rebounds, and 7 Assists, which sounds insane when you look at his college numbers. This is the kind of game Westbrook should have had. Who knows? We might have to start this guy at PG in the future. Sadly, this is not enough to score Harden the Thunder Down Under award, as Kevin Durant more than deserves it with his amazing 30 Points, 10 Rebounds, 4 Assists, 2 Steals, and 1 Block.

Also, I have to applaud Scott Brooks' performance. After we fell behind early, he spent time trying to find a good lineup, and in the end, he gave crucial minutes to Collison and Ibaka in a killer lineup early in the 4th. It was easily the best time of our game. Who would have thought Harden, Ollie, Green, Ibaka, and Collison could have been so productive together? 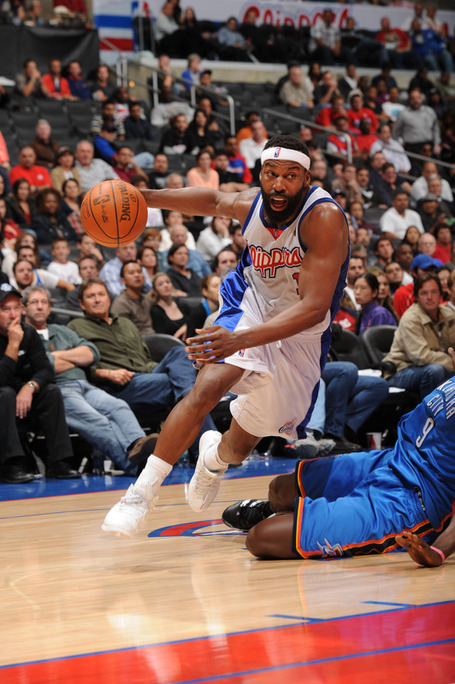 No, Serge! Don't lay on the floor! This isn't Yoga Class!

Speaking of our non-star players, I don't know if Serge Ibaka can play 20 minutes of basketball without getting fouled out. He brings energy, sure. But if he's ever going to be a regular player, he might have to be counted on to give major minutes, and he can't be fouling so rapidly. Playing aggressive is one thing, but fouling out is another. Maybe Thabo can give him some tips. I mean, they both speak French!

On the Clippers side of things, they really gave up the game in the 4th when they put in players who weren't very adept at scoring, which allowed the Thunder to play their style of ball. In all honesty, if they had kept the same game plan throughout, the Clippers would have and should have won this game. It's hard determining the Thunder Plunderer, as Chris Kaman had 20 Points and 11 Rebounds, while Al Thornton had 15 Points and 9 Rebounds. But the award goes to Baron Davis, who had 17 Points, 7 Rebounds, 9 Assists, 3 Steals, 2 Blocks, and no Turnovers. Talk about filling the stat sheet perfectly! Ideally, Russell Westbrook will develop into a Baron Davis type of PG. Someone who prefers to drive on offense but can also shoot the 3, and someone who can grab the long-range rebounds and effectively distribute the ball. Baron Davis doesn't do that every game, but he's one of the closest things in the NBA to an older Russell Westbrook.

Next Game: At the Spurs, Saturday, November 14th, at 7:30 PM Central Standard Time