Wow. what an ugly, ugly game.

After a long fight, the Thunder ended up having the ball 6 points down and with 1:16 to go. Not too bad of a position. Then, the ball was passed in and Russell Westbrook bricked a wide open 3 point attempt, seemingly crushing our hopes. But then, the thunder got the ball back with a bad pass and Jeff Green scored a quick 2. The Kings almost responded with a Cassipi 3, but it missed. Then, Russell Westbrook barely missed a layup to give the Kings the ball and a 4 point lead with 17 seconds to go. But, miraculously, Omri Cassipi missed both of his free throws (after our foul) and we got the rebound and a time out.

So, what happens next? Yes, the obvious heroic Durant 3 Point Shot. After a near miss, Udoka rebounded the ball, got it stolen from him by Sefolosha, and watched Durant hit the 3 pointer that put the thunder within a point with 3 seconds to go. So, it'd free throw time for the Kings. Tyreke Evans up to the line. First free throw up, and it's perfect. Second free throw up, I was afraid it was gonna hit the front of the rim and bounce out, but it was perfect, too.

So, we have the ball with 3 seconds, a 3 point deficit, and a seemingly hot Durant. One can guess what happens here. Durant gets the ball, shoots a line drive 3, aaaand.....it clanks the front of the rim, Thunder lose. We had no business winning that game, as the Kings let the Thunder back into contention, but you hate to see an ending like that one.

2. The Kings aren't who we thought they were.

I mean, honestly, who would've thought the Kings could completely dominate us 80% of the time on the floor after losing their best player? Do they play better without Kevin Martin? Who knows? All I know is that we were dominated for a large portion of the game, with almost a third of our points coming from free throws, and our team being locked in scoring droughts for long periods of time.

One reason could be the fact that we played their type of game. The score may not look it, but it was back and forth down the floor all night long, and since we don't have the good shooting rosters of the Suns or Warriors, both teams ended up missing a lot of shots, turning the ball over left and right, and making the game as ugly as possible.

What happened to our rebounding? I've always been of the thought that we were one of the best rebounding teams in the nation, but I guess the Kings are better. It was mostly the fault of our bench, with Nick Collison getting shut out and Etan Thomas limited to just two.

One could also blame this loss on the foul trouble of Jeff Green. He got into foul trouble early, leading Scott Brooks to venture out a lineup of Collison and Thomas as Power Forward and Center. It was horrible. Every time they got handed the ball, they turned it over or missed a shot. Coupled with a couple of missed Westbrook shots, it was the first time in the game where we really fell behind and played catchup. 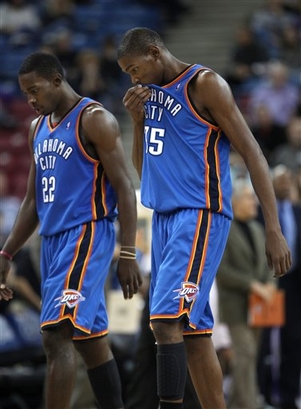 Don't throw up, KD! You didn't play that bad of a game!

There's many more things that I could point out, but those are the main reasons we lost. So, now lets move on to the good aspects of this game, like Kevin Durant. Please, don't blame him for this loss. You can't expect him to hit a clutch shot every time, and he scored 37 Points while hitting all 18 of his freethrows. His game didn't look pretty, but if you want somebody who can get it done the ugly way, this is your guy. If you add on his 5 Rebounds, 2 Assists, and 3 Steals, this equates to a Thunder Wonder performance.

You've also got to hand it to Nenad Krstic, who had 12 points on 5-10 shooting, and an unusually high 8 rebounds. Also of note is James Harden, who had a solid 9 point game off the bench, and a miracle half-court shot before half time. And what about Jeff Green? He got out of foul trouble, got back on the 'ol horse, and had a solid game. 19 Points, 5 Rebounds, and 2 Steals isn't too shabby. In all honesty, he might have been the right guy to take the 3, since he had 6-12 shooting, and Durant was 1-5 for the night, with his only make coming as a desperation shot. I mean, Durant's had his chance at big shot 3s and failed twice, so why not surprise the other team and give Jeff Green a chance? Maybe Scott Brooks knows something I dodn't know, and it's just a thought, but nevertheless, Jeff green has obtained the Thunder Down Under Award tonight.

It's pretty hard to give a Thunder Blunder, considering the only players with atrocious offensive performances were Thabo Sefolosha and Russell Westbrook. Sefolosha had an amazing 6 Rebounds, 6 Assists, 3 Steals, and 4 Blocked shots. Thus, I suppose the Thunder Blunder performance falls to Russell Westbrook, who had 9 Points on 3 of 13 Shooting, 5 Rebounds, 6 Assists, and 2 Steals. Still, the performance isn't that bad, just the worst when compared to his teammates. 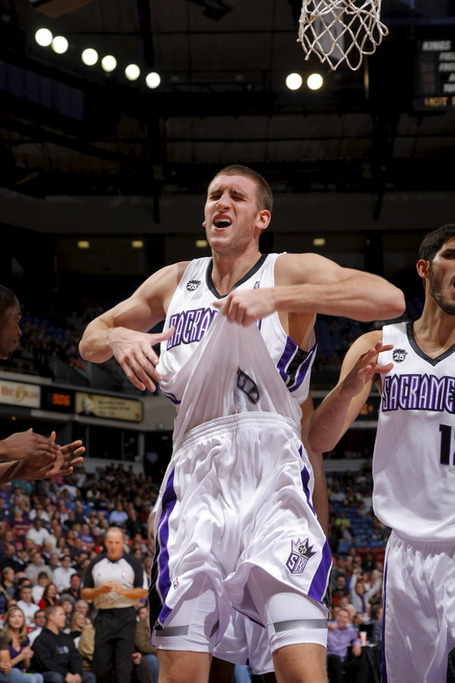 I don't even want to know what's going on here....

Lastly, it's time to talk about the Kings. The entire lineup shot at around 50%, and many of them had excellent numbers. Tyreke Evans was the clear winner of the Russell Westbrook matchup, coming out with 20 Points, 5-16 Shooting, 10-10 Free Throw Shooting, 8 Rebounds, and 8 Assists. His 5 Turnovers are bad, but it doesn't keep him from being the Thunder Plunderer of tonight. Also of note is Jason Thompson, who had 21 Points and 14 Rebounds.

Oh, and, many thanks to the people from Sactown Royalty who came over, pointed out my homerism, and made the comment section much more lively (250 Comments? WOW!). I had a much bigger stake in the game, and I had to admit my complete wrongness in predicting the game. We're a small blog, but hopefully we can get a rivalry going or something. I look forward to our next matchup! Congratulations on being .500!

Next Game: At the Clippers, Wednesday, November 11th, at 9:30 PM Central Standard Time