Share All sharing options for: Grizzlies Take Over in 4th, Thunder Play Well for 3 Quarters, Lose 91-99 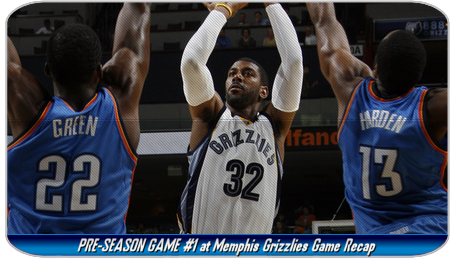 Well, I gotta be honest here, it wasn't a whole lot of fun listening to a basketball game on the radio, but what are you gonna do? This game was apparently not broadcast anywhere on TV, so the only option Thunder fans had to get  in on the action tonight was to listen to the game on the radio. As you might imagine, or as you might have experienced tonight, its not really a whole lot of fun, or easy to listen to a basketball game on the radio. Maybe its just me, but not being able to see the guys playing together for the first time was almost infuriating as I had to sit there and just listen. Anyway, enough complaining, the Thunder did actually play a game tonight, so lets get right to it.

First up a couple of notes on the game in case you missed our preview earlier today. Allen Iverson sat this one out for the Grizzlies after suffering an injury on Sunday, and also Thabo Sefolosha didn't play for the Thunder tonight, so James Harden got the start in his place. He didn't waste any time making his presence felt either, but not necessarily in a positive way by picking up 3 fouls in the first 6 minutes of the game, but had a nice 3 pointer to go with that. To his credit though, he made it into the fourth quarter before he picked up his 4th and 5th fouls. Nenad Krstic also got into a bit of foul trouble early by picking up 2 fouls in the first five minutes of the game, which pretty much set the pace for the Thunder all night long in terms of being in foul trouble. The Thunder racked up a whopping 36 fouls with every Thunder player who got in the action having at least 2 fouls. Make the jump for more thoughts on tonights game...

Both teams came out tonight with their starters (barring injured players) and stayed with those guys for about 10 minutes into the first quarter before putting in some reserves and then bringing the starters back in shortly before the end of the first half. Sprinkled in the middle with those guys were a lot of guys trying to prove their worth and show that they can play with the likes of Kevin Durant, Jeff Green, and Russell Westbrook. Speaking of Russell Westbrook, he looked, err, he sounded really good tonight despite shooting 0-4 from the field, he was able to finish with 5 points and found himself in double digits with 10 assists and only 2 turnovers. Who the hell said the kid couldn't be a true point guard anyway? I maintain that as this team continues to add more scoring threats, RW0 is going to look more and more brilliant at the point and his assist totals should continue to go through the roof as long as he stays focused on what he needs to do to run this offense.

Kevin Durant lead the team in scoring as he so often does, but with only 17 points and on 4 of 9 shooting (not bad for 26 minutes), but the big surprise nipping at his heels was DJ White with 16 points in just a shade under 23 minutes. DJ shot 8-13 and also pulled down 5 boards to go with 1 assist, a pretty impressive game for the unsuspecting 2nd year player. As nice of a surprise as DJ's play was, the same could be said in a negative fashion about Jeff Green tonight who shot just 3-10, scored only 6 points, and had just 2 rebounds in 26 minutes, which was very un-Uncle Jeff like. Nenad Krstic and Shaun Livingston also shot well tonight and surprisingly, to me at least, Serge Ibaka only got 4 minutes of playing time, but he did a lot with those 4 minutes by scoring 4 points on 2-2 shooting with 2 rebounds.

All in all there was a lot of good and bad tonight. The good was the Thunder being aggressive and controlling the game for three quarters while on the flip side the bad was giving up an 11-3 run with 8 minutes left to go in the game when the score was tied at 80 apiece. To be fair though, none of our starters where in the game at all to start the fourth quarter, and if I'm not mistaken, only James Harden got playing time in the fourth quarter. I wish I could give you a little bit better impression of exactly what happened tonight, but again, when you listen on the radio its hard to pick up a lot of the details, so for tonight and the three other non-televised pre-season games to come, your just gonna have to deal with it. Anyway, its just the pre-season, nothing to panic about, and the best news of all is that Thunder Basketball is back, and we had a nice group of people commenting in the game thread, so I look forward to more of that as the season pushes closer. Next up is New Orleans on Saturday night....another radio only game :-(

...oh and here is the box score. SBNation doesn't have our nicer ones ready to go for pre-season, so for now this will do.