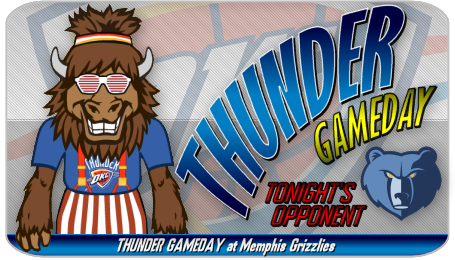 Finally, finally, finally! The Oklahoma City Thunder get their 2009-10 season underway tonight, in Memphis, against the Grizzlies! Who cares if its only the pre-season? Thunder Basketball is back, so get ready to Thunder Up! Sadly enough, at the time of this writing (Last night), we don't have any update as to whether or not this game will be televised anywhere that Oklahomans will be able to see, but at the very least we should all be able to listen on the WWLS, The Sports Animal, which should be carrying the game (although I haven't confirmed that yet either). I'm sure you are quite tired of hearing me complain about the game not being televised, but let's face it, if you are reading this blog on a regular basis, chances are you are a pretty big Thunderhead yourself and just as pissed off. So hey, I'm being your voice, and you just never know who is reading. I griped and moaned all season about games that weren't broadcast in HD and a quick look at the TV schedule for the upcoming season will show that perhaps someone was listening as every single game is listed as being in HD this season.
It is still just a pre-season game, so why should you even care? Well, I'm gonna take a few minutes and hopefully give you enough reasons to be interested. First and foremost is your Thunder Roster is very different than it was just a few short months ago as the team closed out its inaugural season. When you make the jump, you'll see the entire pre-season roster which will be cut down substantially before the season begins. Gone are the likes of Robert Swift, Malik Rose, and Earl Watson, and inserted in their place are a host of new players that you should be just as anxious to see such as Etan Thomas and Kevin Ollie. As young as this team was last season, it may have gotten even younger this year as James Harden joins the mix along with some other terrific young players including Serge Ibaka, and Byron Mullens, amongst others. So go ahead and make the jump to see the full roster, along with our continued preview which will have a few more reasons to be interested in tonight's game, because there are a few more, I assure you.

If you can remember back a few short months, there was some extremely heated debate regarding who the Thunder should take, Hasheem Thabeet, or James Harden. Regardless of who we wanted or who we would have picked (although it does seem pretty clear that Harden had emerged as our guy shortly before the draft), the Grizzlies went ahead and made things a bit easier for us by picking Hasheem Thabeet with the #2 overall pick. So tonight will be our first chance at seeing these two guys match up head to head, even though they'll rarely be close to one another on the court since Harden plays guard and Thabeet is six million feet tall.

Another reason you are going to want to tune in is to check out Allen Iverson in his new home. We all know him, we all um, okay, so we all don't love him, but you still have to respect the guy on the court, no matter his flaws. For now he doesn't even seem to be a clear cut starter on the team, but it'll be interesting to see if that's a motivating factor for him in the pre-season. It'll also be fun to see how he works and interacts with guys like O.J. Mayo and Rudy Gay. Oh wait, that's what you could have looked forward to if he didn't get himself injured on Sunday, so I guess we'll have to look forward to seeing that later on in the year. The Grizzlies are quite possibly the most exciting young team in the league outside of our own beloved Thunder, so this game will definitely be intriguing as two of the leagues better, up and coming, young teams, square off head to head. I tend to think we're a bit further ahead in our cycle than they are and should come away with a win, even if it is just a pre-season game, but the fun part will be watching, err, listening tonight.

Also, we will have a Live Game OPEN THREAD for commenting tonight as I'm sure one way or another a lot of us will be either listening to or watching the game. Hell, if we are listening, there is no reason to not be on the site commenting, so you better get your ass into the thread by tipoff so we can get some nice live game commenting going. Also, we'll update this post and the live game thread with anymore information on TV and Radio Coverage as the information becomes available.