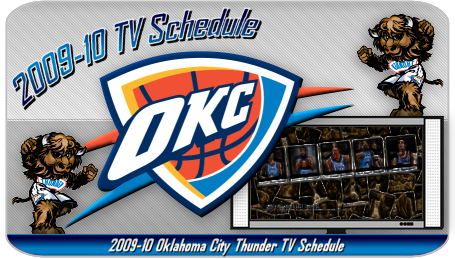 With pre-season action set to get underway in just a couple of days here, that got me wondering about the television schedule and whether or not they would be showing each and every game as they did last season. I'm sorry to say I was a little bit disappointed to find out that it just isn't the case. Hold on now, before you go jumping off of a building, all of the regular season games will be televised, its just the pre-season that will be lacking in coverage for several games, most notably the very first game, which will be taking place on Wednesday evening in Memphis. With fans itching for their first taste of Thunder basketball, and being extremely eager to see the new additions in action for the first time with the likes of Kevin Durant, Jeff Green, and Russell Westbrook, you'd think that someone, either in the Thunder front office, or in the halls of either KSBI or Fox Sports, would realize this and make sure, at the very least, to get the first pre-season game televised.

In any case, that's a sacrifice I'm willing to make just as long as all the regular season games get broadcast in High-Definition, something that wasn't the case last season, and guess what? Oh Hell Yeah! I don't know whether it had to do with the teams abrupt move last season or if someone was paying attention to all the whining and crying I was doing last season, but whatever the case, at least according to this list (Make the Jump), every single Thunder game, be it broadcast on KSBI or Fox Sports Oklahoma, will be televised in glorious High Definition! Thank God for that too because it was almost sickening having to watch standard def games last season, so much so that I almost didn't even want to watch the games. Anyway, enough blabbering, and just go ahead and make the jump to see the full tevelision schedule. I've gone ahead and added where you can find the games as well depending on your provider, so you might want to bookmark this page so it'll be handy anytime you aren't making the trip to the Ford Center for a game.

After putting together the channel listings above, I just realized that the Tulsa Market still doesn't have KSBI HD, so those of you like me in the Tulsa area, we'll probably get screwed on HD for the KSBI games unless Cox throws it on an empty HD channel. I'm glad I made the switch to DirecTV because I should be getting the games in HD, but who knows? Anybody out there have DirecTV and watch KSBI games last season? Where they in HD? Just curious. Anyway, here's your TV Schedule. Your first chance to the see the team will be the pre-season home opener at the newly renovated Ford Center 1 week from tonight. Enjoy