Oklahoma Sooners Lose To Miami, Thunder Should Reap The Benefits

Share All sharing options for: Oklahoma Sooners Lose To Miami, Thunder Should Reap The Benefits 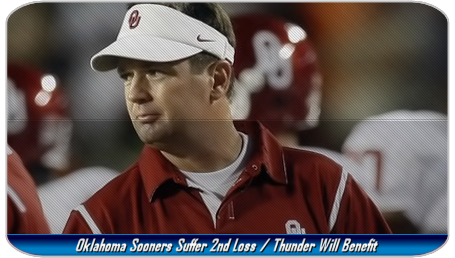 It's really no secret that Thunderland is really Sooner Nation during football season, so we might as well just face it. The Oklahoma Sooners loss last night to the Miami Hurricanes was actually a good thing for the Oklahoma City Thunder. Now don't get me wrong, I'm as big a Sooner fan as anyone, well okay, maybe not as big as anyone, but I have been a fan since I was very young and rarely ever miss a game. That being said, as an avid Oklahoma City Thunder fan, I couldn't help but think, as a I tossed and turned in my drunken stooper at about 2am, about how this loss can positively affect the Thunder.
How so you ask? Well before we jump right into the benefits, lets get some of the obvious stuff out of the way. Since Bob Stoops took over the program, its been a pretty rare occurrence to have a 2nd loss this early into the season. We all know what 2 losses in College football means right? Right, absolutely no shot at playing for an NCAA Championship. While that may be true most of the time, that doesn't mean that the Sooners can't still rebound, win the Big 12, and go on to a BCS Bowl game. However, even that will be in jeopardy two weeks from yesterday when the Sooners take on Texas in the annual Red River Shootout. Should the Sooners lose that game, that 3rd loss would more than likely end any chance of Oklahoma playing in a major Bowl this season. So how does all this affect the Thunder? Make the leap and find out.

While I don't have any numbers at my disposal to back this up, it seemed to me that there was a definite pickup in attendance and enthusiasm the day that Sooner football season ended last year. Reason being is that Sooner Nation is devoted till the last game, especially when Oklahoma is in the hunt for the National title. So while many die hards won't take off that OU hat for a Thunder shirt until January, no matter what, many of the more casual Sooner fans might be pulling out that Kevin Durant Jersey a bit earlier this season as they move ahead and begin to focus on Thunder basketball, as opposed to Oklahoma football, since their season is/will be effectively over by the time the NBA regular season tips off next month.

Obviously anyone who is a fan of both teams doesn't really want to hear this, but you can't argue that this isn't a good thing for the Thunder. As Oklahoma City gets set to tip off their 2nd season in the newly renovated Ford Center, its going to be important to make a statement by continuing to support the team with just as much effort and enthusiasm as during the inaugural season. Better yet, if possible, even improve upon last season's tremendous support in an effort to send a message to the rest of the country that not only can the NBA work in a small, untested market, like Oklahoma City, but it can thrive here.

Another big positive for the Thunder in this loss is that as the team tries to establish itself as the premier sporting event in the state, it won't have to compete as hard to get the attention of the fans. This will allow them to pull more people, more often, into the Ford Center, and into Thunder Nation as the team continues to build towards a championship. If they can continue to grow their fanbase now as the team is developing, it could help sustain this team for years to come as they grow into and beyond title contention. Probably the worst time for any organization is the rebuilding process after that "dynasty caliber" team gets old and must be dismantled. If the Thunder can grab and hold on to fans attention now, they may be able to get their love and support forever, since the fans here are so loyal. Now, they may never be able to out draw the Sooners during football season, but the opening two months of the season likely won't have to suffer ever again if they can use this opportunity to widen their fanbase and capitalize on bringing some Sooner fans over to the Thunder before they otherwise would have, and potentially turn some of the more casual Sooner fans into die hard Thunderheads. Time will tell of course, but this season, it doesn't look like the Thunder will have too much in state competition to compete with as they continue to establish themselves in Oklahoma.