There was hardly any energy in the Palace last night, and I could tell why. Their team just got beaten by the Thunder!

The first half was really a struggle. We were constantly behind the Pistons, committing turnovers left and right. It really was a miracle that we were close at all. Luckily, the Pistons are so offensively inept that they couldn't jump out to any sort of game-defining lead.

Nenad Krstic really carried the team through the 3rd quarter. And you've got to hand it to him. The Thunder really took advantage of the fact that Ben Wallace and Kwame Brown can't play any perimeter defense by drawing one of them to a ball handler and dishing it out to an open Krstic at the top of the key. Nick Collison carried this into the fourth quarter, hitting a couple of jumpers of his own.

The quarter-defining moment in the 4th had to be when Rodney Stuckey was easily blocked by Etan Thomas in the lane which lead to Harden and Durant having a fast break down the floor which ended with an emphatic dunk by Durant. As Brian Davis put it, "Just as the needed their main man most, KD on his pony to ride!" This opened up a 5 point lead that the Thunder didn't look back from until late in the game.

At 3:06, the Pistons got back to within 5 of the Thunder, after several defensive plays by both teams. But the Thunder came back again with an pass by Westbrook to Krstic in the paint for an easy layup. The Pistons would never get as close as that again, and it was smooth sailing from there on out.

There are so many times and situations where we would have lost this game last year. But, this is a more experienced team, and they know how to take care of the ball and manage the game when it matters. Granted, we've beaten possibly the two worst teams in the league, but nonetheless, I'm satisfied with our progress. 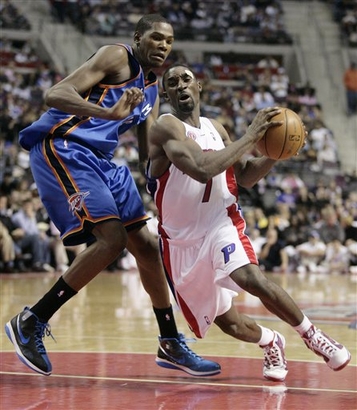 Ben Gordon was trying to drive down the lane against Kevin Durant, but then both he and KD spotted something disgusting down there, so they decided against it.

The lane was open for business all night. We just kept running pick and rolls to open up things for a cutter or a big man in the paint, and it happened over and over again all night long. If we didn't commit so many bad turnovers, I'd venture to say that this would have been a blowout. This really helped out a lot when Durant was smothered by Prince on defense.

You've really got to applaud James Harden for his performance last night. He didn't have a good scoring night, but he did his job in knowing where to be on the floor and knowing who to pass to at the right time. You'd think that a rookie wouldn't be that helpful to his team, but here he is! 8 Assists! 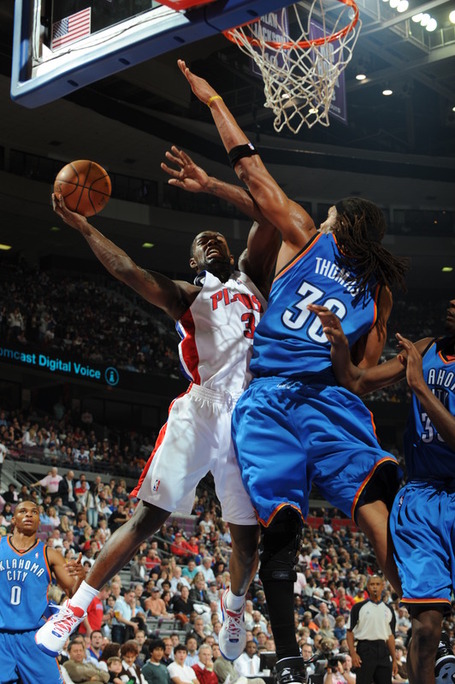 See? Etan Thomas can be useful!

Etan Thomas showed us what he's worth today. This was his element, banging against slow, plodding centers like Wallace and Brown. He was able shut them down offensively, clog the lane for incoming traffic (he had 3 blocks), and, since he is so bad on offense, make the other centers defense a non-factor. Granted, he was able to slip past them for 6 points, but that's only a plus, right?

As far as the Pistons go, you really have to feel for their fans. Here's a team that has the talent and the offensive weaponry to easily beat the Thunder, but no point guard to tie the team together. Granted, Rip Hamilton accounted for some of their lack of offense, but, like I said in the preview, a true point guard would do wonders for their offense. Will Bynum and Rodney Stuckey are both scorers, and not distributors. And, perhaps, a more athletic Center that could defend long-range centers on the perimeter.

Nevertheless, that's not our team, and I'm extremely excited at the fact that we're the #1 team in the nation. It's time for the awards! 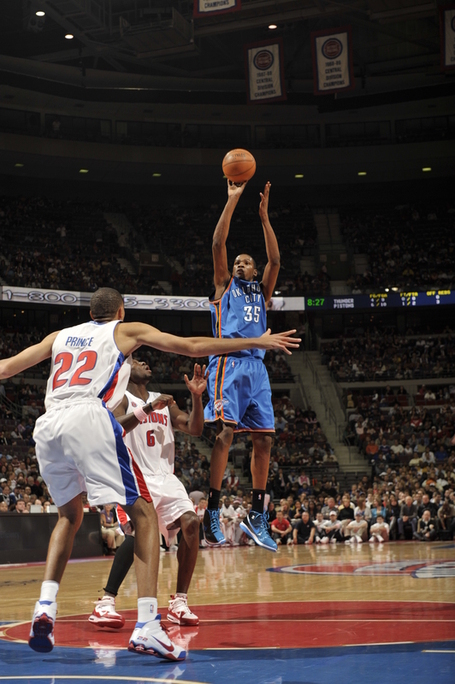 KD, simply doing what he does best.

The Thunder Wonder for this game, again, goes to Kevin Durant. He had a good offensive night despite being guarded by Tayshaun Prince, and his dunk early in the 4th set the tone for the rest of the game. Excellent job, KD. 25 Points, 12 Rebounds, and 2 Steals!

The Thunder Down Under award goes to Nenad Krstic. He fouled out, but he still managed to exploit the offensive match-up of Wallace and Brown while carrying the team through the 3rd quarter. 14 Points and 6 Rebounds. Props must also go to Russell Westbrook, who had another double-double with assists, and Nick Collison, who bounced back from a poor opening night performance with 8 Points and 8 Rebounds in 16 minutes, exploiting the same match-up as Krstic.

Now, for the bad news. Jeff Green did alright, but he had a bad shooting night, hitting only 6-14 for 16 Points. He also had 4 turnovers, which isn't that bad, but Russell Westbrook had an abysmal 5 turnovers, and 2-11 shooting. Kevin Ollie spent some time on the floor, but he simply existed. 1 Rebound, 1 Assist, and 2 Points on 1-2 Shooting in 14 minutes. Serge Ibaka only got 1 rebound in 3 minutes of play. But, this award has to go to someone. I can't give it to Westbrook or Green, since they were so integral to the victory, and I can't give it to Ibaka, since he had no time to show his stuff. I'll go ahead and give the Thunder Blunder to Kevin Ollie then, since he should have done more with his time on the floor. I mean, would 3 assists be too much to ask? Still, there were no glaringly bad performances, so this award is kind of unfairly given.

On the Pistons side of things, there's no question that the Thunder Plunderer was Ben Gordon. Simply put, this guy carried his team in the 4th, wasn't phased by Sefolosha's great defense, and scored a crucial 25 points. Of course, he didn't shoot as good as he normally would, but that's mostly a result of good play of Sefolosha, not bad play by Gordon. Rodney Stuckey had 21 points, but most of it was earned at the line.

Next Game: Versus the Trailblazers, Sunday, November 1st at 6PM Central Standard Time.

Okay, It's time to come back to Earth.