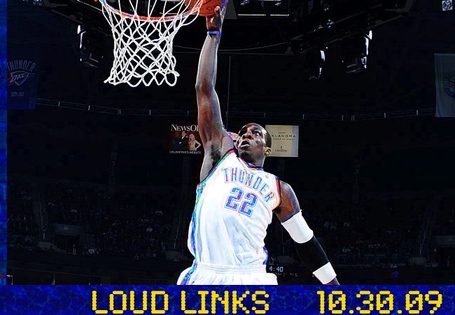 Green Street " Bill Simmons talks some hoops
(Bill Simmons places Kevin Durant over Lebron James again.) Do you want to claim temporary insanity on the statement that, when all is said and done, that Kevin Durant will be better than Lebron James? Well, I think he is going to be more successful. You know. I said that, when everything was said and done, that we might book back on both their careers and say that Kevin Durant was better. And it is going to come down to, from day one, they put him in a better situation. They weren’t rushing him, they were building a young team around him, they have cap space. They have money to spend next summer. Cleveland, from the get go, were panicking to put guys around [Lebron]. They were signing older guys, over-paying for guys. They never had a plan. He’s been on bad teams and he has had a coach that has never known how to use him and now we are in Year 7. You watched the game the other night, he is still a one-man team. This is Year 7, he should have teammates by now. What if he goes to the Knicks? In my opinion that is Gretzky with the Los Angeles Kings all over again. It is just Lebron carrying this crappy team in his prime. I think the stars are aligned for Durant. They have four straight lottery picks, they have a ton of cap space, they have one of the best executives in the league. He is in a position where he could be the best player on a really good team for 12 to 13 years, potentially.

Detroit might have to play in home opener without Rip Hamilton
Friday's opponent, the Oklahoma City Thunder, are a very difficult opponent for your hometown Pistons. Kevin Durant is on the verge of stardom (or is he there yet?), Jeff Green looks like a legit #2 option, and Russell Westbrook appears to have grasped the point guard position after all. Points are not very hard to come by with this group. They might not have a very deep bench, but we know James Harden can pour in points, and Nick Collison defines that steady, proven NBA big man role. At the very least it should be an highly entertaining game as each team does their best to light up the scoreboard. The ball tips at 8pm ET. Check it out on Fox Sports Net.

Northwest Division preview: Oklahoma City Thunder | Blazers Blog - OregonLive.com
(Darnell Mayberry breaks down the Thunder for Blazersblog) Durant will have to show as much all-around improvement as he did in his second season. And that's asking a lot. He needs to become a better and more consistent defender, rebounder and playmaker. He also needs to lower his turnovers and make better decisions. But without question the most important trait he needs to show is an ability to carry his team down the stretch of close games with more than just his scoring. I don't think the savviest observers will truly recognize him as an elite player until he leads his team to a respectable win total and becomes the guy who does the damage when the game's on the line. As for his All-Star chances, I don't consider Durant a lock. He'll have to beat out last year's starters Amare Stoudemire and Tim Duncan and reserves Pau Gasol, Dirk Nowitzki and David West. He'll also have to contend with Carmelo Anthony, Ron Artest, LaMarcus Aldridge, Carlos Boozer and, to a much lesser extent, Shawn Marion, Josh Howard and Richard Jefferson. I think it'll come down to the Thunder's win total at the All-Star break. Durant will certainly get his numbers and be in the conversation. But if the Thunder is, say 15-36, I don't think he has much of a chance. All of the aforementioned players he's competing against are in positions to be big contributors on much better teams.

First Hero of 09-10 Is ... Damien Wilkins? -- NBA FanHouse
(Former Thunder Damien Wilkins put a game winning shot for the Wolves) It's guys that will eventually be answers to trivia questions making huge shots that endear them and their teams to the hearts of young fans who first make a connection with this crazy, random, beautiful game. The heroes aren't just the guys on posters and All-Star ballots, sometimes they are journeymen who show up every day, don't shoot a great percentage and get the job done. Wednesday was Damien Wilkins' day.

2010 Top 55 Most Influential In Basketball
(Sam Presti is ranked as the 35th most influential person in basketball. Really? Number 35?) 35 - Sam Presti, General Manager, Oklahoma City Thunder – Presti has become the model for the next generation of basketball executive. There is not anyone in the industry who does not want to do business with Presti; he is honest and he takes extreme care of his players and staff. Presti has an eye for talent that is almost unmatched. If he can turn Oklahoma City into a perennial playoff contender, he may be able to write his own ticket for the next 15 years.

Rip Hamilton may miss tonight's home opener | freep.com | Detroit Free Press
(Oh yeah, you might have heard that Rip might miss tonight's game) Rip Hamilton suffered an ankle injury in the Pistons' opener and his status for today's home opener against Oklahoma City is in question. Hamilton was hurt with 5 minutes left in the Memphis game Wednesday night when he landed on O.J. Mayo's foot. Hamilton shot two free throws and eventually left the court for treatment. He spent Thursday's practice with his foot and ankle in ice and under the watchful eye of Arnie Kander, the team's strength-and-conditioning coach. "It's hurting and it's sore; it hurts more than yesterday when it happened," Hamilton said Thursday. "Hopefully it'll get better soon. We don't think about not playing. I've been locked up all night since it happened. We haven't taken off the tape to get a good look at it.

Kevin Durant finds the key to winning | NewsOK.com
(KD likes video games. Everyone on twitter knows that.) If you had one guess, what would you say is driving Kevin Durant this season? The scoring title? An All-Star appearance? A playoff berth? How about video games? "People might not believe me, but when I go home (after practice) I play video games and I lose all the time," Durant said. "And I get so mad that I come back and I want to win everything. Something that small puts that winning mentality into my head."

Thunder notebook: OKC aiming to avoid last year's miserable start | NewsOK.com
(This is why OKC has a special team.) "We like playing with each other," Collison said. "We want everybody to do well, and we’re just concentrating on playing the right way. Nobody’s angry. Nobody’s upset and feels like they’re getting the short end of the stick. Everyone is pulling for everybody else, and it’s easier to play like that."

Thunder signs G Sefolosha to 4-year extension - Taiwan News Online
(More on the Sefolosha extension.) Sefolosha, 25, was married with three young children. He said the stability for the family was "something that also pushed me to do this this year." "It's a relief," Sefolosha said. "It definitely feels good just calling the family and telling them, `OK, it's done and I'm going to be in the NBA for a few more years.'" Zucker said the deal came together quickly in a 24-hour period after team chairman Clay Bennett "stepped up and improved the offer significantly." He credited Presti for "pushing it and pushing it" to get the deal done. "It's a fully guaranteed deal," Zucker said. "He was seeking stability and longevity and so were they."

List Ranker - Rank 'Em: Best NBA Players - ESPN
(Share your opinion! Rank KD with the league's best.) With the curtain being lifted on a brand new season of NBA action, we want to know how the league's most prominent players rank in your mind. Does another ring on Kobe Bryant's finger solidify him as the best player, or does that title go to the King himself, LeBron James? Is Brandon Roy more talented than rookie of the year Kevin Durant? And where does fantasy-favorite Chris Paul (arguably the best point guard in the league) fit into the mix? Give it your best shot and rank 'em!

Kings aren't OK in season opener - Sacramento Bee
The comfort level was gone, along with the swagger. "Two-Easy," as Evans has been known since dominating the prep ranks in Chester, Pa., and later in his spectacular solo season at Memphis, had the hardest of times in his pro debut. He had company almost every time at the rim, as rising star Russell Westbrook pestered with his length. Evans hurt his cause by uncharacteristically missing the few layups that went uncontested. The contrast of his counterpart emphasized Evans' struggles even more, as Westbrook was electric in every way with 14 points, a career-high 13 assists and just two turnovers.

TNT has most-watched night of its NBA coverage - USATODAY.com
(This seems like an exciting year for basketball) The doubleheader featuring title contenders Boston, Cleveland and the Los Angeles Lakers produced Turner's most-watched opening night in its 26 years of airing the NBA. TNT drew nearly 3.7 million viewers Tuesday for the Celtics' 95-89 victory over the Cavaliers, followed by the Lakers' 99-92 win over the Clippers. That was a 43 percent increase over the 2.6 million that watched last year's opening-night doubleheader.