Breaking News! The Thunder are the #1 team in their division, in their conference, and in the NBA. Undefeated, baby!

Well, that was a pretty big win, considering it was again a one-man-team. There was a point in time in the early 3rd quarter that Kevin Martin had literally half of his teams points. Now, that's acceptable early in the game or if you're having an absolutely monster night, but not in the second half of a blowout. In all honesty, nobody but Martin helped to step up and alleviate the scroing draught on the Kings. Cassipi had 18, but he scored most of his points in garbage time.

And that's why we won this game. We turned the ball over a lot and we had some missed opportunities, but when the other team has absolutely no scoring help for their star, they're not going to win a lot of games.

Granted, you could also say that the win was due to our excellent start, and that was also a contributing factor. Once the bar was set at 10 points, the Kings never managed to climb back within that range.

You could also chalk up the win to the excellent play from our starters. Sefolosha struggled as he tried to defend Kevin Martin, but Russell Westbrook had a near triple-double with 14 Points, 7 Rebounds, and 13 Assists, and Krstic, Durant, and Green all hauled in over 20 points. But, if you're going to give the Thunder Wonder award to anyone, you'd have to give it to Russell Westbrook, especially since he limited himself to two turnovers.

Nevertheless, the Thunder Down Under award goes to Nenad Krstic, who had an amazing night of 20 Points and 7 Rebounds. If anything was going to convince Scott Brooks of his starting spot, that would be it. Both Green and Durant had their usual nights, but Jeff Green had an usually high 3 blocks.

There is no question in my mind that Etan Thomas is the Thunder Blunder here. I don't need to list his stats; in fact, I'm not even going to list his stats at all. All I know is that whenever he got the ball in the post, it was almost a guaranteed turnover. Okay, granted, he only has one turnover on the stat sheet, but he had 3 shots blocked, and who knows how many more balls swatted out of his hands that were fortunate enough to land in the hands of teammates. He had one dunk, and believe me, I cheered for him when he finally got that dunk, but this guy has either got to step it up offensively, or pass the ball back out to the perimeter. To be honest, he's reminding me of me and Adonal Foyle on offense. And that's a very, very bad thing. 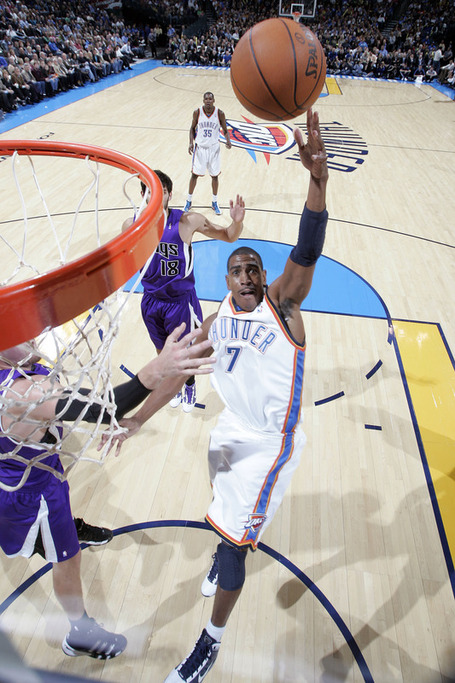 Kevin Ollie is just as surprised as I am at his poor performance tonight!

I was a bit surprised by the poor play of our bench tonight. James harden had triple singles, which is to be expected for a rookies first game, but Nick Collison had 2 Points, 1 Rebound, and 3 fouls, while Kevin Ollie had 2 Points and 1 turnover. Collison should step it up after this game, but his might should really be a lot better than Etan Thomas', especially when those nights are against the Kings. I'm not really expecting much from Ollie, since he's a journeyman. Whats more puzzling about his performance is why Shaun Livingston never got any minutes. I thought we were in universal agreement that Shaun was being groomed for playing the backup role? Did P.J. Carlesimo take the coaches chair again? It would be great for me if he did, but bad for everybody else. Hopefully Livingston gets some minutes moving forward.

Also of note is the decision to put Kyle Weaver on the Injured Reserve. I have a feeling that will change over the next couple of weeks, but it might just be wishful thinking. Obviously, B.J. Mullens and Ryan Bowen were going to the reserve, but for that third spot, you have to decide between Thomas, Weaver, Ibaka, and White. In all honesty, you only need one of Ibaka or White, and the only reason Thomas is on the roster is because he's getting paid the big bucks. Heck, I'd rather have Weaver on the floor than Ollie at any point of the game. His future Thunder career is looking pretty grim at the moment, but he's just an injury or sloppy performance away from getting on the active roster and having a shot at playing.

There should be no question in anybodies mind that Kevin Martin was the Thunder Plunderer tonight. 27 Points, 4 rebounds, 4 assists, and 3 steals speaks for itself. I think the tragedy of this guy is that while he scores in bunches on his own, he doesn't do a whole lot to improve the players around him. It's not necessarily a huge knock on him, but on a team that is struggling and needs some scoring help from other sources, it can't do a lot to help the win column. 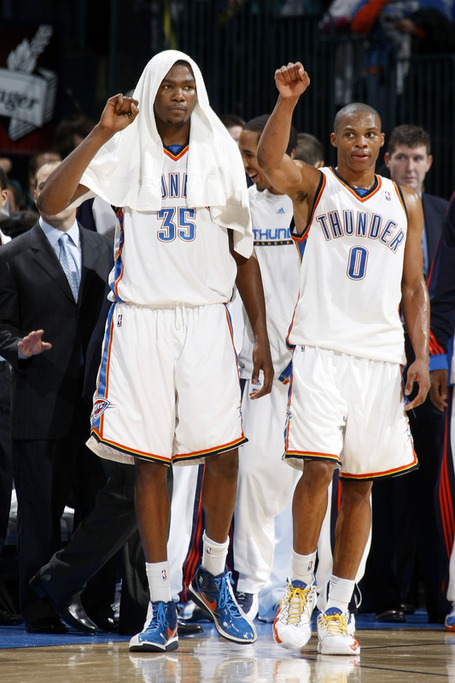 Durant and Westbrook "Thundering Up".

As an aside, I'd really like to applaud the Thunder's TV coverage team. I'll be the first to admit that Nenad Krstic saying, "Thunder Up", James Harden saying, "Community", and Jeff Green saying, "Rise Together" was hilarious, and it made no sense. And then when a ball bounces into the middle of an empty gym, and they start dancing like they're in a Space Jam music video, my jaw just dropped. I didn't know what to say. And then, when you had Brian Davis and Grant Long trying to be, "cool" by crossing their arms, I almost died of laughter. But, almost every other station used standard stock music, standard FSN or Comcast graphics, and an overall average looking product. But the Thunder went the extra mile to make their broadcast look presentable, and that all but makes up the horrible coverage they have early last year.

Also, some guy in front of me tonight had a sign that read simply, "Kings Suck". And he didn't just scribble it down, it looked like he spent a good 5-10 minutes on the sign. But why? It's too vulgar to get on TV, it's too simplistic to be of any worth design-wise, and it's stating the obvious. I mean, if he held up a sign that said "Beat the Kings" and it had artistic value or was a free give-away, then it's an acceptable sign to hold. But it wasn't any three of those things, so he might as well have held up a sign that said, "Birds Have Wings".

Can we continue our undefeated run for 82 more games? Hey, anything is possible.

Lastly, apologies for the late recap everyone. I try to make it a point to do the recap on the same night, but I was just so exhausted after a long day that I needed a nights rest before completing this. Thanks for understanding!