Get Ready to Chant: Thunder Up!

Share All sharing options for: Get Ready to Chant: Thunder Up! 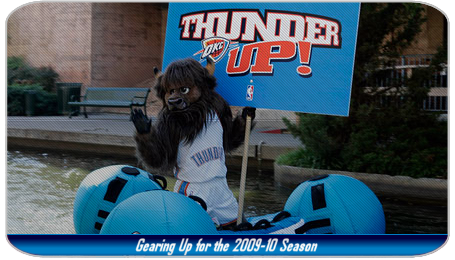 Well, I haven't had as much time as I would have liked to dive into all the off-season stuff, and I'm finding that I may just have to forget whatever happened while I was gone and focus on the here and now since training camp is already underway (Which is being covered like mad over at the Official OKC Thunder Website, look for the popup) and the pre-season is just a few short weeks away. So in the coming weeks we'll probably be focusing on some of the usual pre-season speculation type stuff that always brings with it some very heated debate. Also, we'll take a quick look at some of the new additions to the team, and what that might mean for the upcoming season, and down the road.
I'm also going to try and hook up with the guys that were brought on to the staff shortly after last season (dishingoutdimes, daddydai, ElectricPencils, and mleetch32) to see if we can figure out a way to get everyone worked into the site in a way that remains cohesive with my content as well as workable into their own real-world lives, provided of course they have interest in remaining part of the team (Be on the lookout for an email sometime this weekend fellas). I realize I rubbed some people the wrong way, and probably none more than these guys, so no hard feelings if they choose not to contribute, so stay tuned on that. Aside from some of the site mumbo jumbo above, one thing became very apparent to me when I started re-scoping out the Thunder Fan Scene, so take the jump to find out what that was.

Okay, okay, so yes, you didn't really need to make the jump to see what I was talking about since I put it in the header and title of this post, but damn it, I need a few page views to make me feel better when I go to bed at night, so thanks so much for making the jump. Of course I'm talking about the new "Catch Phrase" that is sweeping across Thunder Nation as the 2009-10 season approaches. Thunder Up! as you can see in this 60 second video below is the new catch phrase. You can expect to be chanting it inside the newly renovated Ford Center all season long, and just so you don't look stupid, watch this video and learn the correct pronunciation of the chant. Its three parts, are you ready? THUN...DER...UP! There you have it folks, we're gearing up for another season here at WTLC, and we can't wait to Thunder up! along with all of you.