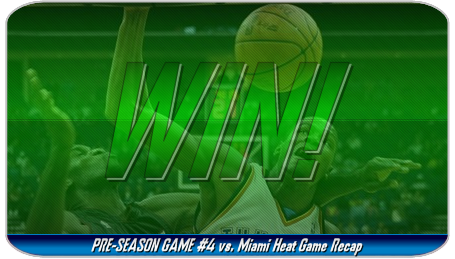 So I know I'm a little late to the party with this game recap, so I'll try to keep it short and sweet. Last night the Thunder picked up win #2 of the preseason, and did it by overcoming a double digit deficit heading into the 4th quarter. Leading the way was Kevin Durant who dropped in 18 of his game high 30 points during that fourth quarter surge. He struggled to stay on the court much of the night, due to foul trouble, but still managed to put in 32 minutes of playing time. Jeff Green was the other guy getting the job done for the Thunder tonight, and for the first time this pre-season, really shot the ball well, knocking down 9-16 shots including 3-3 from behind the arc. Russell Westbrook continued to dish the ball well and finished with 7 assists tonight, but also turned the ball over 4 times. RW0's statline looks fairly similar tonight to what it did nearly every game a year ago, but hey, if this is his worst effort so far this pre-season, that definitely bodes well for sophomore season.
I wish I could give you some better details on the game, as well as thoughts and comments but unfortunately I didn't get to see much of the game. Hey, its pre-season though right? If I'm going to be missing games, I should probably do it now as opposed to when the actual regular season tips off right? On top of that the games so far have only been in standard def and you can't actually expect me to watch that can you? Seriously, it hurts my freakin' eyes, and half the time I don't even know what the score is because the picture is so junky. I'm kidding, but anyway, the Thunder did pick up their second win on the pre-season and evened up their record at 2-2 with 3 games left to play next week, only one of which (Tuesday) will be televised. Make the jump for the box.