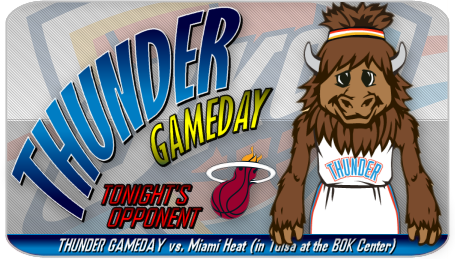 The Thunder got a big pre-season win on Monday night at the Ford Center, against the Phoenix Suns, via overtime. While it was nice to see the team get a notch in that "W" column, it wasn't all peaches and cream either, as the team blew a sizable fourth quarter lead before heading into overtime and taking care of business. That said, it honestly seemed like they were taking care of business against a Suns team that seemingly just wanted to get the hell out of there, and rightly so, its pre-season, nobody wants to see these guys play longer and risk injury. But enough about Monday nights game, seriously, if you want to read about it, we've put down plenty of thoughts on the game right here for you to check out.
Tonight's game will be the 2nd home game of the pre-season of the Thunder, but it won't exactly be a true home game since it won't be taking place in the Ford Center. Instead, it will be taking place up the Turnpike in Tulsa, where fans on the other side of the state will get a chance to see the team play in their own backyard instead of  having to make the drive to Oklahoma City. For any of you down in OKC planning on making the drive up, you won't be disappointed too much with the BOK Center. It's about a year old now and a damn fine facility on its own, in fact, at least before the renovations this season, I'd say it was superior to the Ford Center. But having not seen the improvements this season first hand, I can't say how the two compare now. Either way, sometimes its fun to see the team play in other arena's, and this will be your only chance to do that while still in the great state of Oklahoma. Oh, and if you were active in our Live Commenting thread during Mondays Suns game (or even if you just read through it later on), you might have noticed my bitching about the game not being broadcast in HD, well, after a looking poking around I noticed something, take the jump to find out what.

Last week we posted the 2009-10 Oklahoma City Thunder broadcast schedule directly from the Oklahoma City Thunder website and upon quick recheck earlier today, I noticed that they have since changed the pre-season KSBI games from KSBIHD to KSBI. Interesting huh? Perhaps someone inside the Thunder organization is reading our little blog here, and taking note of my constant bitching. Now, if only I can convince them to give me a press pass and let me sit at the scorers table for every home game we might have something. Seriously though, its nice to at least see this corrected because I was quite scared that all KSBI games would be broadcast in SD only for those of us outside Oklahoma City. I still have this fear for Cox Cable users in Tulsa as they generally just broadcast KSBI games on Channel 3, but now having DirecTV, I still have hope for HD KSBI Games.

Anyway, its still pre-season, so I don't really see the point in talking about matchups or what this teams needs to do to win since that's not even really all that important. For those of you in Tulsa though, who haven't made the trip down to Oklahoma City for a Thunder game, go ahead and make your way down to the BOK Center tonight and check out our professional basketball team. If Kevin Durant, Russell Westbrook and the rest of the crew have another game like they did Monday, you surely will NOT be disappointed! Tipoff is 7pm and the doors probably open at 6pm if I remember correctly from last years game at the BOK. We'll have a Live Commenting Open thread during the game for you guys watching on TV in Oklahoma City.