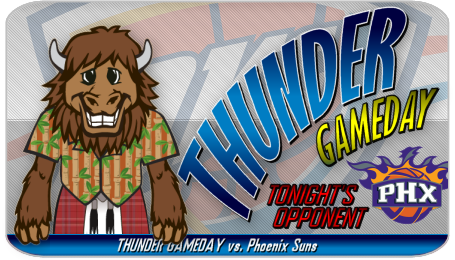 So the Oklahoma City Thunder will make their 2009-10 home debut tonight in the Ford Center as they take on the Phoenix Suns. Thus far the Thunder are 0-2, with both losses coming last week on the road. All in all the Thunder have been able to take a lot of positives and negatives from each of their first two games. In reality, The Thunder probably should have won both those games as they let 4th quarter leads slip away to big runs. Tonight will be another important step in getting this team ready for the regular season, and being as its the first home game, perhaps head coach Scott Brooks has a plan to get us a win.

The starters have yet to play much more than 25 minutes in either game last week, but perhaps being the first home game, guys like Durant, Green, and Westbrook can get into the 30's (minutes) for the first time this pre-season, in an effort to not only get them a little bit closer to regular season type minutes, but to also re-energize Thunder fans as they make their way back into the Ford Center for the first time since last spring. In the process it could very well give this team a much needed win and a boost as we head closer to the regular season opener. I also apologize for not getting this up sooner and being as late as it is, we'll skip the long winded game preview that usually gets posted, and instead let you take a quick look at the roster as you're probably already about to head down to Bricktown for a little wining and dining before trotting on over to the Ford Center for tonight's game. So make the jump and take a peak. Tipoff is 7pm, and we'll have an OPEN THREAD posting 30 minutes prior as we usually do for commenting and such.