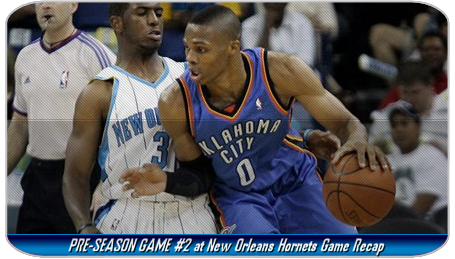 Game #2 of the pre-season came at a time when many of you probably didn't even know the Thunder were playing. Reason being was the early 1pm start time which happened to be going on at the same time as the Arkansas, Oklahoma State, and Oklahoma football games. Now maybe you'd have paid more attention if this was a regular season game, but since it was pre-season, I'm willing to bet not many people listened to the game today, and sadly that includes me. I was only able to listen to parts of the first quarter before I had to head out. I am willing to admit and plead guilty to not finding out about todays early start time until this morning, and by then it was a little too late to change personal plans for the day. Anyway, enough of my weaksauce excuses for missing the game, and lets instead give you a little bit about what actually did happen today.
Russell Westbrook is the biggest story coming out of today's game, without question. He followed up Wednesdays 10 assist, 2 turnover game, with an 8 assist, 1 turnover game today. Its beginning to look like Russell Westbrook really does have the will and desire to be a true point guard in this league, and not only that, he's proving it with his play on the court. His 2-8 shooting night and only 7 points still leaves a lot to be desired in the contributing direct points category, but he still has plenty of time to get that ironed out. He also nabbed three steals to go with 2 rebounds. I really can't wait until Monday nights game against the Suns so we can all finally see (either at the Ford Center or on TV, KSBIHD) his progress for ourselves and see exactly what he's doing. We'll be able to see if his court vision has improved, and see just exactly what is making the difference in his point guard stats, as I like to call them (Assist/Turnover). We've got a few other things to discuss about todays game as well, such as how Serge Ibaka did in his first outing with a sizable amount of playing time, and how did Jeff Green respond after his poor performance on Wednesday. So go ahead and click that little "continue reading" link below and find out.

So we teased about Serge Ibaka before the jump, and we'll get to him, but if you read our game preview this morning, you know I was more than curious to see how Jeff Green would respond to the poor performance on Wednesday. Offensively, it looks like he continued to struggle shooting the ball, knocking down just 7 of 18 shots from the field, and hitting only 1 of his 5 three point attempts. He also turned the ball over 4 times, but to his credit, he did nab 9 boards, and 2 steals. If you take a look at all of that in a snapshot, and I can only guess, since I didn't see the game, but it really looks like he was hussling and trying to make things happen today. Perhaps pushing a little too much on the offensive end trying to force shots. But on the defensive end, that hussle translated into rebounds, 9 in total, to go along with two steals. It really looks like the passion and the want to make things happen was there today, but the shots weren't falling, and I'm willing to bet he was pressing a bit offensively. Overall, it was an improvement, but offensively, still leaves a lot to be desired.

As for Serge Ibaka, he took a big first step today towards not only making this team, but towards becoming a regular contributing member of this team. Scott Brooks gave Serge 26 minutes of playing time, and in those minutes, he scored 12 points, on 6-10 shooting, nabbed 9 boards, 4 of which were on the offensive end, and also blocked 2 shots. All in all, a pretty productive and positive performance for Ibaka, who if he can continue to produce like this, while minimizing his mistakes (which at least on the statline, didn't appear to be any today), he'll not only make this team, but earn more and more minutes in the rotation. I'm hoping Brooks continues to give him these kinds of minutes as the pre-season continues and see if he can't keep up this strong play, or even improve upon it. Perhaps he's further ahead in his developement than any of us expected, which is a tremendously good thing.

Offensively tonight, as you can tell by the 79 point total up there, the Thunder struggled shooting. As I mentioned above, Jeff Green shot 7-18, Kevin Durant shot just 2-11 and scored 7 of his 11 total points from the free throw line, which is nice, but you'd like KD to score more than 4 points from the field, especially in 28 minutes of playing time. Kyle Weaver was another guy who had a dreadfull shooting night, making just 1 of his 7 shots, and finishing with just 4 points in 24 minutes. He'll need stronger performances than that if he plans on seeing any sort of adequate playing time during the season with RW0, Shaun Livingston, James Harden, and Thabo Sefolosha all ahead of him either guard position depth chart. He might even find himself designated for assignment in Tulsa, just to get him playing time, if he doesn't significantly improve before the regular season begins.  Kevin Ollie and BJ Mullens also recieved quite a bit of playing time, but their statlines were both rather unimpressive. As a team, the Thunder shot 37% from the field and were outrebounded 36-50, and as we all know, you aren't going to win too many ballgames by shooting that badly and getting your ass handed to you on the boards.