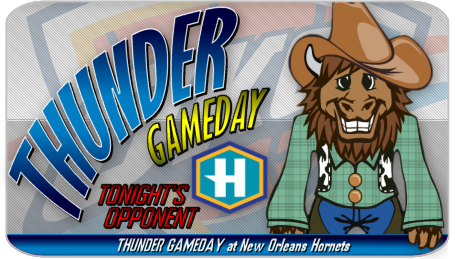 The first thing you need to know about tonight's second pre-season game is that it isn't "tonight's" game at all, its actually an EARLY afternoon game, which tips off at 1pm Local time. Once again, the game won't be televised, and you're only chance to watch this one is going to be listening to WWLS, The Sports Animal, on FM 98.1 / AM 640 in the Oklahoma City area, or on 97.1 FM in the Tulsa Area. Again if there is anyone out there with a little bit of pull or power that wants to push for all the pre-season games to be televised next season, we'd certainly appreciate it, and I think just by me watching the game it'll have better ratings that "Matlock" and "In the Heat of the Night"  which apparently was more important for KSBI to broadcast than showing a Thunder pre-season game. So if you can get that taken care of for us, I'm sure all us die hard Thunder fans would appreciate it.

As the Oklahoman points out in this article, essentially four players are battling for one roster spot. Those guys are Ryan Bowen, Mike Harris, Tre Kelley, and local boy Michael Ruffin. In the Thunder's first pre-season game the other night against the Memphis Grizzlies, Ryan Bowen got a nice chunk of playing time to show what he could do, while the other 3 guys watched from the bench. Bowen got 21 minutes of playing time which he used to take just 2 shots, both of which he missed (1 of which was a 3 point attempt), grab 3 rebounds (1 offensive), block 1 shot, and turned the ball over just once. All in all, just looking at the stat-line its hard to judge his performance, especially when we didn't get to see the game since it wasn't televised, but he didn't have too bad of a game, considering he's making an attempt at being the last guy on the bench, so to speak. From the article linked above, it was his hustle that really stood out, and I think one thing all Thunder fans love, and me especially (which is why I love Nick Collison so much), is hustle. Today's game should give one of the other three an opportunity to prove what they can do. Click the jump link to hear some more about today's game and what we are hoping to see.

The first thing I'm looking for in today's game is Russell Westbrook, and whether that 10 assist effort the other night was a fluke, or if he's improved his style of play so much this off-season that he's already going to be one of the leagues better point guards this season. He took just 4 shots, and racked up assist after assist to go along with 4 rebounds and only turned the ball over twice. Sure, we're used to RW0 racking up at least double digits in points, but with the addition of James Harden to the mix, perhaps that pressure for him to score upwards of 20 points per game is being lessened, significantly. If that's the case, imagine how many double doubles the kid is going to have this season, seriously! If he can keep up distributing the ball like this he'll be pushing the double digit assist mark all season, and I think we can pretty much bet that he'll be at least double digit in score on a nightly basis as well, and that's not even mentioning his rebounding which can sometimes pop up there into double digits as well.

The next thing I'm looking for is Jeff Green, and a much a improved outing for him. In Wednesdays game he had probably his work game, at least statwise that I can ever really remember seeing from him. Again, its hard to know what else he was doing on the court just from listening to the game, but, in 26 minutes of play, he managed just 6 points on 3-10 shooting to go with only 2 rebounds and 2 steals. This is not the Uncle Jeff we know and love, and this is not the guy we expect to see on a nightly basis this coming season. So it'll be interesting to see how he responds today and what kind of game he has. I'm banking on a 16-20 point performance with 5-7 boards today for Jeff Green. Let's see if he can do it.

Thirdly, is that even a word? I guess so since spell-check didn't change it, anyway, we're going with it. Thirdly, I want to see more of the young guys, Serge Ibaka, James Harden, D.J. White, and Kyle Weaver. I want to see what Ibaka can do with 20-30 minutes if he was able to score 4 points (2-2 shooting) and grab 2 rebounds in just 4 minutes of playing time. I want to see if D.J. White can continue to perform at such a high level in back to back games, and against good competition. Perhaps throw DJ out there early in the first quarter to get him some time against Nola's starters and see what he can do. Of course to do that, you'd likely have to cut into Jeff Greens time early, but hey its pre-season, why not start D.J. and throw Green out there late in the first and let him work the remainder of the 1st and most of the 2nd before bringing D.J. back in with the rest of the starters to clean up the end of the half? Look at me trying to be coach here. Anyway, I'm just intrigued by the way D.J. played on Wednesday and want to see what the kid can really do, as I'm sure Uncle Jeff's performance was just a fluke, we all know what he's capable of.

Finally, I'm just interested to see what Brooks plans on doing today. Is he going to give starters 25 minutes of playing time again? Is he gonna play with the rotations more? Work some of the young guys in with the starters to see how they will work with our premier players and against better competition? What's he gonna do? How is he going to continue to get this team prepped for the season opener which is already less than 3 weeks away! Can you believe that? just 18 more days until live regular season Thunder basketball! Man I'm excited, so turn that radio (come on guys, its the Hornets!) on at 1pm today and Thunder UP!